Secondary education began in Opunake in 1920 with nine students being taught at St. Barnabas Church Hall however this arrangement only lasted a couple of months as some pupils left school and there were insufficient numbers to warrant continuing. By 1924, the Headmaster of the primary school and secretary of the School Committee canvassed the district and found enough students to open a Secondary Department in one small room placed on the primary school grounds and thus in 1925, Opunake District High School was born with the name remaining for the next 30 years. The roll quickly grew to 57 students and by 1928, a block of buildings consisting of one classroom, a laboratory, a cooking room and a woodwork room were built on the current High School grounds.
In 1929, the motto “Ut Prosim Patriae” (That I may be of use to my country) as found on our current crest was adopted. For the next 25 years, secondary education kept rolling on. In 1951, the East Wing and Administration buildings were opened, in 1954, the school baths were complete.

In 1956, the Secondary Department of the Opunake District High School and grown big enough to formally become a full High School, and the first Principal of Opunake High School – Mr R.C. Griffiths was appointed to the role. Over the next ten years, a North Block was added (1958), tennis and basketball courts were completed, the Assembly Hall opened (1962) and the Hill Wing completed also (1963).
In 1964, Mr B.V. Cooper was appointed Principal. W.D.R Currey (PE Teacher) became the first in a long line of students or staff members to represent New Zealand by being selected to the All Blacks.

From the mid-sixties to current days, sporting success became synonymous with Opunake High School. If ever there was a case of the little school taking on the big boys then that was us. In 1973, our Boys A hockey team won the prestigious NZ Secondary Schools Hockey Associations India Shield, in 1977 Graham Mourie was selected for the All Blacks, from 1983-85 our Girls cricket team first won the Southern Division, and followed that up with winning the Taranaki Championship the following year, from 1990 our rugby boys won the Taranaki Secondary Schools Championship three years straight.

In 1980, one more wing was added to Opunake High School, the current Len Harvey Wing housing two laboratories, a lecture theatre/filmroom, kitchen and common room for seniors was opened. The euphoria of having this new building quickly gave way to sadness and trauma on a Saturday night, early October 1982 when fire broke out at Opunake High School, quickly spreading to the administration area, library and hall taking out nearly half the school.
It wasn’t just a big moment for the school, but the whole community. “Young and old, many of them quietly sobbing, stood there helplessly. Teachers watched their precious notes and resources go up in flames. There were moments of sheer drama, for example, when seconds after firemen had escaped off the roof, the Assembly Hall literally exploded in flames”

In a typical display of community togetherness, over 200 people gathered on the Sunday to start the clean-up and within two weeks through donated books, resources and equipment, the school was functioning again, with students working out of relocatables. It took until 1987 for the school to be restored to its previous state, more recently the Pivac Technology Centre has been developed (2007) and in 2017-18, our Main Block was entirely re-roofed, along with some of our staff spaces being redeveloped.

The future is bright and full of colour for Opunake High School. In more recent times we have developed our DREAM values (Diligence, Respect, Exceeding Expectations, Aroha & Mana) along with adopting a mantra of “Growing good people for a rapidly changing world” which in all reality is what Opunake High School has always been about – providing opportunities to learn and train to be the best rangatahi our young people can be. 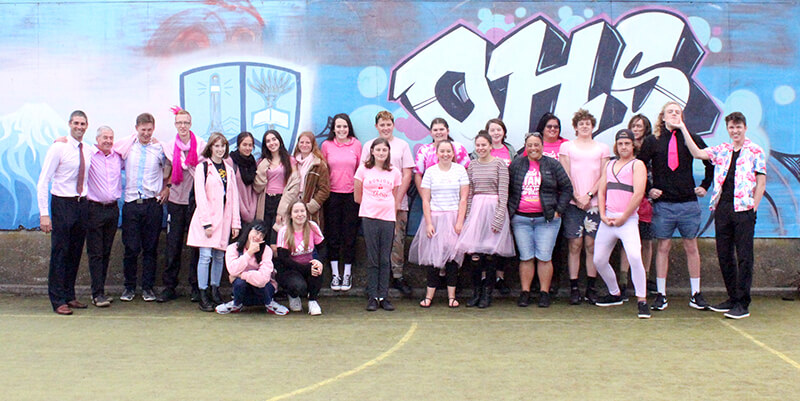