Change for a better future (1-July)

These words were spoken into life on-stage at the Nga Manu Korero Speech Competition, held at Sandford Events Centre on the 27th June, by Opunake High student, Thomas Tito.

Tom, grandson of the late  Paramount Chief for Taranaki George Tito and Mary Tito, says Nga Manu Korero was an opportunity for him to speak his truth of what he has seen or wants to see in our environment and country – in his own words from taking the time out of class, from the happy to slightly annoying practices it all paid off in the end.

“Even waiting for my name to be called in those few seconds just thinking about the journey I had tryed to form the speech from an idea at Nga Manu Korero Nationals in Gisborne, until being on the stage to experience it first-hand.”

“Special thanks to Marama Mohi, Leilani Leatherby, Keesha Craig and Waimirirangi Thomas-Wikaira who put up with me talking about the same thing over and over again and to my great inspirations my grandparents (George Te ara  marama Tito and Mary Merekingi (nee Davey) Tito) this was an opportunity for me to carry on their legacy and to pay homage to all the work they have done for me.”

“So let me finish off with a whakatauki that I finished my speech off –
E hoa ma, ina te ora o te tangata,
My friends, this is the essence of life”.

Day 1 – On departure of the 54th Manawatu Exchange the weather was great, with everyone on board, we managed to leave Opunake High by 8.20am. After a quick toilet stop and food run at Sanson, we headed onto Manawatu College in Foxton, arriving 11.45am. We were welcomed into the college with a powhiri. Those student that were able to, had something to eat courtesy of our hosts.  The likes of the Girls Volleyball, Mixed Hockey, Girls Soccer and the 1st XV Rugby all headed out straight away to get changed for their games. 1pm saw the girls volleyball get underway, girls soccer at 1.30pm and then 1st XV at 1.45pm.  The hockey travelled to the Levin turf and they started at 1.30pm.

Unfortunately our Volleyball girls were unable to handle the skill of the Manawatu girls, they went down fighting but lost in three sets. Our Soccer girls came back from 2- 0 down at half time to end up drawing their game 2-all. Awesome effort. Thank you to Mr Graham Smith, coach of the girls to give up your precious time and come down to Manawatu to coach this team.

The Hockey team scored first but by half time, the score was tied at 2-all. Some great determination by Opunake saw us winning 4-2 in the end, and keeping their unbeaten, 54-year record going.  A big thank you to Mr Lloyd Morgan for also giving up your time to come down to Manawatu and coach this team.

The 1st XV, didn’t have a great build up, with a lot of illnesses, they managed to bring in replacements from the Under 15’s. Still, there were a lot of the other senior boys put their bodies on the line while still getting over the nasty cough-flu that has been going around. The Manawatu team were on a mission and they started very strong and we couldn’t hold them out. Our boys had a better 2nd half but unfortunately lost by 68 – 20 in the end.

Girls Basketball had a really tough battle on their hands. They would get a lead of 12 or more points during the game only to have Manawatu come right back at them. Girls held their own in the end and ended up winning 38 – 35. Thanks to Mr Aarun Langton, who travelled down to Manawatu College also, to coach these girls in this exchange. So by end of Day 1 we had two wins, two loss and a draw.

At 4.00pm the groups headed out to the Matau Marae. The weather at this time was slowly closing in, with a few showers of rain coming in. We were welcomed at the Marae with a Powhiri, and we thankfully didn’t get wet. The great host also had some food on the tables, for a snack while everyone got themselves ready for dinner and the Hawaiian-themed social back at the College. We didn’t have much time for everyone to get showered and ready but everyone was very considerate of the long lines waiting for the showers and we all managed to get ourselves ready on time, some really making the effort to dress up for the social. We headed back to the College for Dinner at 6pm. Lovely food was prepared for us, all to eat. At 7.10pm we headed over to the hall for the social and the students danced up a storm. Many heading to doorways for some fresh air. The social finished at 9.30pm. Back to the Marae. Some made a hot chocolate or had a juice then everyone was snuggled up in their sleeping bags by 10.30pm and off to sleep.

Day 2 – We up at 6.00 – 6.30 am, had breakfast and we were on the road back to the College by 8.15am. Unfortunately the heavens opened up and the Netball girls, tried valiantly in the pouring rain but couldn’t  match the skill of Manawatu girls in these conditions, they ended up losing in the end by 33-21.

Senior Boys Basketball were in their element. The goals were a bit lower and most of the boys had a dunking time during warm up. The boys started the game with a hiss and a roar, and didn’t let up on their Manawatu opponents throughout the game. They won 63 – 33. So final result was three wins, three losses and a draw, overall the exchange was a Tie!

Thank you to the staff of Mrs Kerry Walsh, Mr Michael Griggs, Whaea Robyn Davey and Miss Ashleigh Tito-Collins, for your efforts coaching, managing and supervising this group of students, and Mr Weir for giving up his time to drive us in the big bus.

Another great exchange, and hopefully enjoyed by all ! 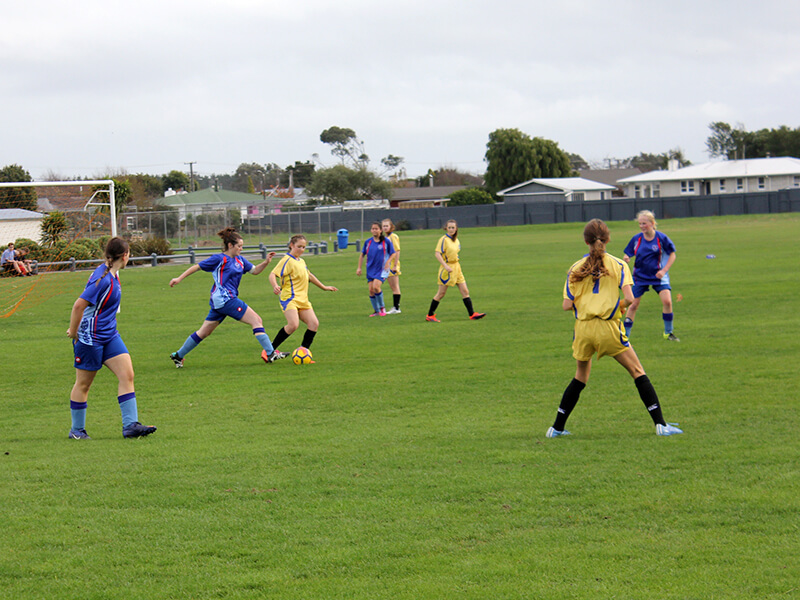 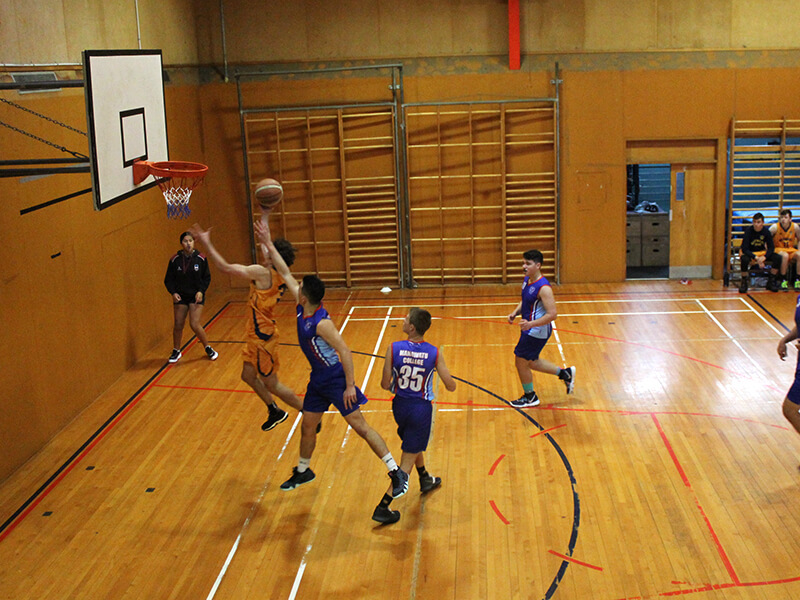 During the holidays, I got the opportunity to attend an advanced leadership course located in Fiji. With some very generous support by the Lions Club and some teachers at school I was able to book my flights – leaving New Zealand on the 20th of April and returning home on the 27th of April.

On the first and last night we stayed at Tokatoka Resort in Nadi as it was close to the airport. On the other days we stayed at the Marist Brothers High School in Suva. From Tuesday we did community work such as going to ACS High School to plant trees and learn some of the culture and history of Fiji. Another day we went to Mosquito where my group picked up rubbish and built huts that survived the hurricane test.

Throughout the week everyone got to lead a task, one of my first tasks was to teach everyone the waiata that we would be singing.

about mental health. Doing these activities helped me become more confident when talking to others and giving instructions. It also helped me learn that I need to be more organized when leading a task, it also helped me to go way out of my comfort zone and try new things.

and I am very glad that I didn’t give up. I would also like to give a big thanks to Tina and Dean Chapman for believing in me and helping me organize everything in time.

This course was the best thing that I have ever done and I learnt so much.

Some advice from me: if you are given the opportunity to do something that can benefit

yourself and others and also go way out of your comfort zone I advise you to take your hands and grab at anything you can before it goes away! 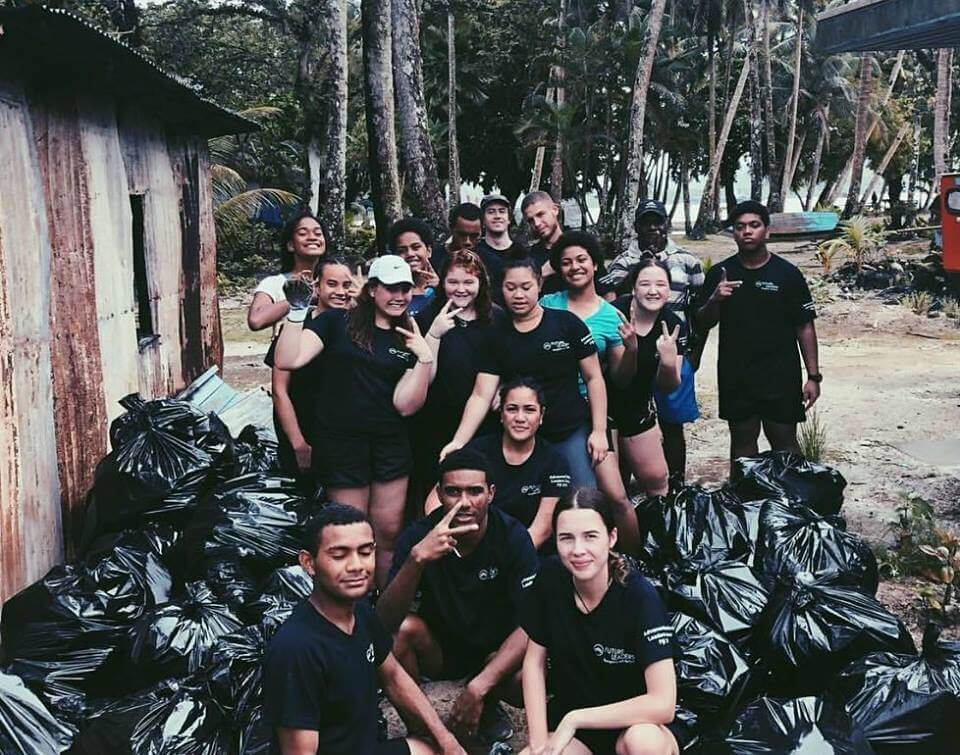 While most of us were kicking back in the holidays unwrapping chocolate bunnies and the likes, our Head Boy Joel Clement was busy unpacking how to care for the environment at the Blake Inspire programme (formerly the Sir Peter Blake Trust Youth EnviroLeaders Forum) in the Waikato.

As the sole student from Taranaki, alongside 56 other students, Joel was busy learning about environmental issues including climate change, marine and freshwater health and biodiversity decline

“I’ve always been very passionate about environmental science and climate change, this opportunity will help me decide on my career and study pathway, having a week learning about how climate change will impact New Zealand.”

Joel is also a part of the Sustainability Academy heading to Fiji later this, and is a great example of taking any and every opportunity that comes your way. Well done JC.

The events of March 15, 2019 in Christchurch changed Aotearoa forever. Most of us at Opunake High School were packing up to head home, some of us were racing to get to Womad, for the Muslim community in those mosques, some would never get home again.

To honour those lost in Christchurch, our Prefect Team and senior students organised a series of events; a mufti day, a symbolic coming together of staff and students to form a heart representing Aroha, a C for Christchurch and a Crescent Moon honouring the Muslim community (pictured) and like the rest of New Zealand we stopped at 1.30pm on the Friday to stand in silence along with the rest of Aotearoa for two minutes, for us – it was a small fraction of time with a massive amount of meaning.

At Opunake High, we hope to never forget that day and the subsequent lessons we have all learnt. #theyareus.

Today some of our rangatahi joined with people from all over Taranaki for the Relay for Life at TET Stadium, Inglewood. Pretty much everyone knows someone where cancer has had an impact on their life – so to see so many people together supporting each other is inspiring.

This is what some of our crew had to say;

“The vibe is positive and a good vibe and everyone is here to support the fight against cancer.”

“Best part was seeing the survivors and they have been through a lot and they get to see all of the other people who are here to support them in their fight against cancer.”

“I liked participating in the Zumba stuff and eating food”

“I am here for my nan who has cancer, and my nan is a survivor but my granddad has cancer.”

“We have a schedule of when we are walking or running so everyone gets a go. They should have a challenge for how many people can walk around the track for the whole time with no stopping so they will be the best supporters of the fight against cancer.”

“The live music and photo booth are cool”

“Its social and good fun” 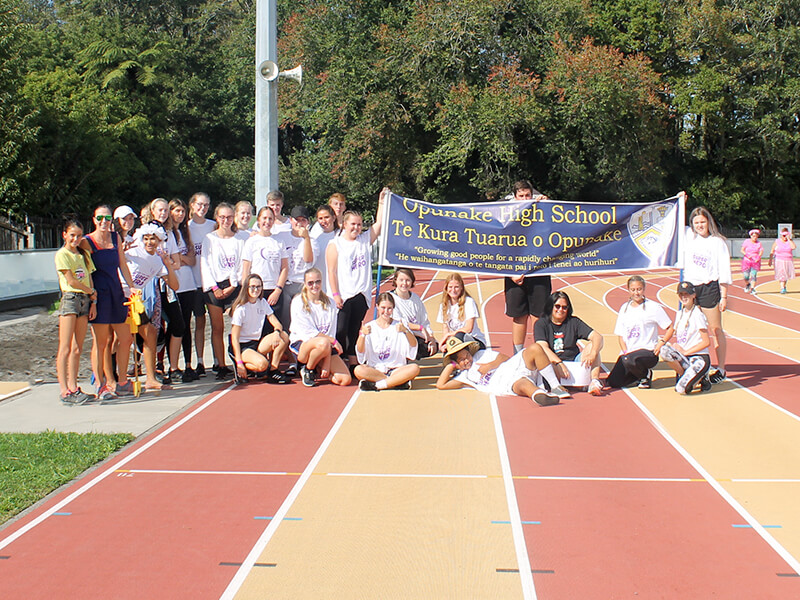